As a thirty-something, I am in the largest market in gaming right now.  I grew up in the SNES Golden Age of RPGs with games like Final Fantasy III/VI, Earthbound, Chrono Trigger, Secret of Mana, and Illusion of Gaia.  Naturally, I was excited to hear about Chrono Trigger‘s spiritual successor I am Setusna, which released in July 2016 (it had to be better than the actual sequel Chrono Cross).  Added to my excitement was that most of those games were made by Squaresoft (now Square Enix), and Tokyo RPG Factory is a team within that company just to make classic RPGs.

What could go wrong?

Although this article is not a review per se, I will briefly answer ‘not much.’  Personally, I think they did better with I am Setsuna than their second game, Lost Sphear.  Both games are far from perfect, but LS made the battle mechanics even more unnecessarily convoluted and the plot less sensical without changing what I would have liked to see improved.  Maybe next time.  But for all my complaints, they are both enjoyable.

Both games have a very similar structure.  A group of adventurers work together to save the world from its certain doom. That’s every RPG ever, isn’t it?  But the extra points that connects these games are 1) the cyclical nature of the world, and 2) the sacrifice.

Warning: there will be some spoilers for both games!

Many mythologies include stories about the ‘Ages of Man.’  In these stories, one civilization falls and another rises, usually over the course of four civilizations (e.g. Greek Mythology–check it out!).  Lost Sphear includes this myth as a basic part of the story, and the Moon causes the destruction and renewal.  I am Setsuna hints at something similar throughout the game, and at the end, it is revealed that your party is stuck in an infinite loop until you are able to defeat the boss.

Allegorically, there is a lesson here: so many things never change, but we need to keep working.  Human nature is fallen, and we will tend toward vice over time.  Vice will cause the fall of civilizations, not to mention personal lives.  What can help?  Sacrifice, of course. 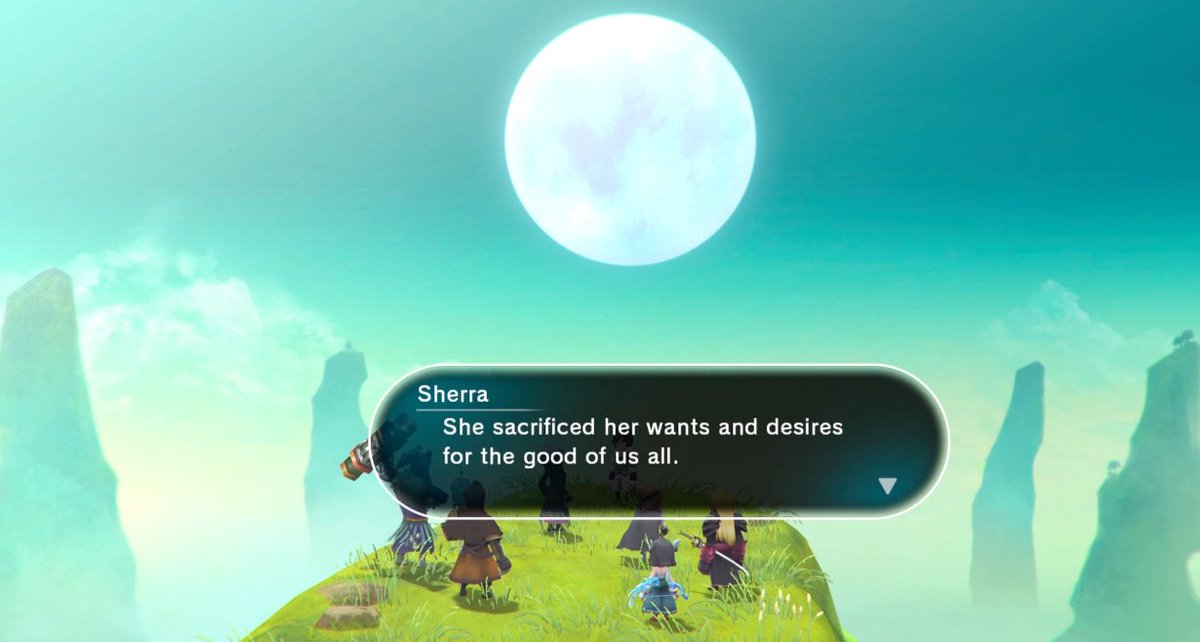 In I am Setsuna, Setsuna’s death is guaranteed from the beginning of the whole game.  Between the pilgrimage and the mercenary sent to kill her, she is going to die.  The game explains over time why that must be so, but her death at the end is not a surprise.

In Lost Sphear, the story is much more convoluted, so it isn’t until the final act that we learn one of the characters must die.  In fact, in the alternate ending, you can keep her alive, but the entire world suffers.  So I’m going to say that the true ending is her death, the ending of the Lost phenomena, and the salvation of the world.

This is another wonderful lesson that fits with classic RPGs and their grand style of narrative.  These games were meant to be great fantastical works about heroes, courage, and virtues.  Inspired by this heritage, Tokyo RPG Factory has produced two games that remind us in the dark times, we must be willing to sacrifice to save our friends.  Forgiveness, mercy, and optimism pervade these games.  We can always do good.

They each have ups and downs in their gameplay and storytelling, but the optimism of the moral lesson is clear and fulfilling.  Everyone could gain from experiencing this game, and I hope that Tokyo RPG Factory produces more games like this–but I do have a list of suggestions if they want to hear 😉

“Elisabet, being smart will count for nothing if you don’t make the world better. You have to use your smarts to count for something, to serve life, not death.”  – Horizon Zero Dawn “This situation, […]

Welcome to the third in a three-part series looking at Christian imagery and lessons in the Final Fantasy franchise. Final Fantasy is my favorite video game franchise, and it is one of the most well-known […]

Octopath Traveler: The Good, The Bad, and the Very Pretty

July 16, 2018 Ann Moser Gaming Comments Off on Octopath Traveler: The Good, The Bad, and the Very Pretty

I am very comfortable riding on the Nintendo Switch train.  I watched its reveal in January 2017, and I went to the midnight launch to get my console, but what I’ve been awaiting since January […]