“Elisabet, being smart will count for nothing if you don’t make the world better. You have to use your smarts to count for something, to serve life, not death.”  – Horizon Zero Dawn

“This situation, with its lights and shadows, ought to make us all fully aware that we are facing an enormous and dramatic clash between good and evil, death and life, the “culture of death” and the “culture of life”. We find ourselves not only “faced with” but necessarily “in the midst of” this conflict: we are all involved and we all share in it, with the inescapable responsibility of choosing to be unconditionally pro-life.” – St. Pope John Paul II, Evangelium Vitae 28

Spoiler warnings for the plot of Horizon Zero Dawn

Released in February 2017, Guerilla Games’ Horizon Zero Dawn is one of the most widely acclaimed PS4 games, surpassing 7.6 million copies sold within the first year.  It is not an understatement to say that the game was an instant classic with action and RPG fans alike for its complex fighting controls, its open world, and its lush graphics–not to mention the giant robot dinosaurs.  Set in a world 1000 years after present-day when a robot plague had destroyed life on Earth, the expansive game contains a wide variety of themes and storylines, sometimes making it difficult to understand what value we can take from it.  Maybe, some could argue, religious players should avoid this game. I myself crossed my fingers early on in the game that religion would not become the enemy. Much to my surprise and pleasure, religion was not only not the enemy, but the most powerful takeaway from the game is deeply Catholic. 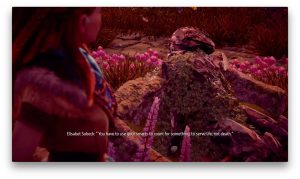 When the protagonist Aloy finally finds the remains of her genetic mother Dr. Elisabet Sobeck, Aloy and the player hear Elisabet recount a lesson from her own mother that she never forgot: “Elisabet, being smart will count for nothing if you don’t make the world better. You have to use your smarts to count for something, to serve life, not death.”  Every player who finishes the game, no matter what other quests they did or choices they made, will hear those powerful words.  Readers of the Old Testament will likely hear the echo of another powerful statement: Testes invoco hodie caelum et terram, quod proposuerim vobis vitam et mortem, benedictionem et maledictionem. Elige ergo vitam, ut et tu vivas (“I call today heaven and earth as witnesses, that I have put before you life and death, blessing and curse.  Therefore choose life so that you also may live” Deuteronomy 30:19). The apocryphal Didache begins with a similar idea: Ὁδοὶ δύο εἰσί, μία τῆς ζωῆς καὶ μία τοῦ θανάτου, διαφορὰ δὲ πολλὴ μεταξὺ τῶν δύο ὁδῶν (“There are two roads, one of life and one of death, and the difference between the two roads is great” Didache 1).

But in the current era, no one has brought the idea of the Culture of Life and the Culture of Death more into parlance than Pope St. John Paul II’s Evangelium Vitae.  Although the papal encyclical focuses on the modern issues of abortion and euthanasia, the discussion is framed in the larger context of valuing the dignity of humankind.  A look at three of the main characters, Theodor Faro, Elisabet Sobeck, and Aloy, shows how this game can serve as an amazing tool in understanding what it means to be pro-life.

There will be immense spoilers for the entire game.

Part I: Theodor FaroThe Pharaoh of old, haunted by the presence and increase of the children of Israel, submitted them to every kind of oppression and ordered that every male child born of the Hebrew women was to be killed (cf. Ex 1:7-22). – EV 16

The antagonist Theodor Faro might believe himself to be a “Gift from God” (“Theodor”), providing massive robots for America.  But his desire for control–seen in the impenetrable security of his robots leading to the Faro Plague–causes the death of all life on Earth.  Much like the Pharaoh of the Old Testament, Faro in Horizon Zero Dawn causes the senseless death of many.

Whereas the Biblical Pharaoh intended for all male Hebrew children to die, Ted Faro did not wish to eliminate life on Earth.  Driven mad by guilt, Faro became convinced that knowledge was a disease. If knowledge of the past were given to the future of humanity, they would ruin the world yet again.  Intent to fix this mistake, Ted Faro destroys the record of human knowledge as well as the remaining designers of the system that will save the world.

His actions are wrong on many levels, but one mistake is the nature of knowledge.  Faro believes that knowledge per se will corrupt humanity. He seems unaware of any other view or that knowledge itself is a tool, neither good nor bad except in how it is used.  Faro was driven by his company, his ego, his profit, unawares that knowledge and technology could be anything else.

But the game does not leave this lesson untaught to the player: we have Faro’s foil, Elisabet.

On a more general level, there exists in contemporary culture a certain Promethean attitude which leads people to think that they can control life and death by taking the decisions about them into their own hands. What really happens in this case is that the individual is overcome and crushed by a death deprived of any prospect of meaning or hope.  – EV 15

Elisabet Sobeck is the opposite of Theodor Faro, introduced into the game explicitly as the person through whose grudging help Faro can fix his mistakes.  Her name and the name of her own company set her in opposition to the executive, as explained in the notes on Wikia (accessed 7.4.18), but so does her attitude.  Although appearing ruthless at times, she nevertheless finds hope for the future.

This hope for humanity comes at the price of her own life.  She sacrifices her life for her co-workers, but also seems exhausted by her work.  The choice to sacrifice the current generation of the world in order to allow life to continue is a terrible ethical situation, and it is too much of a burden for any person.  She tells her coworkers, tired, that she wants to go home. “…The individual is overcome.”

Over the course of her life, she has displayed virtues of compassion, self-sacrifice, and the consideration of others as well as the world.  Without such training, she never would have been able to design the massive terraforming robot to reboot the earth. Technology can be used for good–”to serve life,” as her mother said–but the decisions are crushing without that hope of life eternal.

Women first learn and then teach others that human relations are authentic if they are open to accepting the other person: a person who is recognized and loved because of the dignity which comes from being a person and not from other considerations, such as usefulness, strength, intelligence, beauty or health. – EV 99

Aloy, motivated by the need to uncover where she came from, follows Elisabet Sobeck to the very site of her death and learns what makes her genetic mother so amazing: her compassion.  In a dialogue with Sylens, who values Elisabet’s knowledge and knowledge per se as the best commodity, Aloy informs him that Elisabet is “better” only because she cared not for her own good but to give up everything for the future of the world.

Our protagonist is able to recognize the inherent value of people, perhaps because she is desperate to have connection with her own mother after growing up as an outcast.  Her main personality features are what St. Pope John Paul II and others in the Church understand as the feminine genius: the desire for and ability to build authentic relationships by caring for others. “…They are open to accepting the other person”.  She takes on so many sidequests and builds relationships around the world through this desire–and then begins to teach others like Sylens through her example.

Her unique origin and amazing abilities make the other Nora believe she is the “Anointed” of the Goddess.  On the one hand, it is amazing that the people, even with the lack of knowledge of the past, have that inner longing for the “Anointed,” aka Messiah, aka Christos.  On the other hand, we all know that the child of Elisabet–Elisabeth–is not the Anointed, but John the Baptist.

It is no wonder that Aloy, like the John the Baptist, dislikes being mistaken for the Anointed One.

Conclusion:In seeking the deepest roots of the struggle between the “culture of life” and the “culture of death” […] We have to go to the heart of the tragedy being experienced by modern man: the eclipse of the sense of God and of man, typical of a social and cultural climate dominated by secularism, which, with its ubiquitous tentacles, succeeds at times in putting Christian communities themselves to the test. Those who allow themselves to be influenced by this climate easily fall into a sad vicious circle: when the sense of God is lost, there is also a tendency to lose the sense of man, of his dignity and his life; in turn, the systematic violation of the moral law, especially in the serious matter of respect for human life and its dignity, produces a kind of progressive darkening of the capacity to discern God’s living and saving presence. – EV 21

The dignity of human life is put front and center into the overall plot of Horizon Zero Dawn, including one scientist’s assurance that the reborn humans will not be genetically modified in any way.  There are complications because of individual characters, divergent plots, and the option for scientists to euthanize themselves if they refuse to help the terraforming project.  But this is an open-world game, with its past corresponding to current time. It is unsurprising that the scientists, even the protagonist Elisabet, wrestle with the “culture of death,” witness “systematic violation of the moral law,” and have deep doubt about “God’s living and saving presence.”  Even when Aloy manages to stabilize the world again and build a “culture of life” against Eclipse and HADES, no one is able to offer the peoples of the world any promises beyond life other than what they have constructed for themselves in their religions, grasping desperately at that internal call towards God.

The sequel, if any, will sadly probably only retrace these steps and force Aloy to fight HADES again, but I can pretend it will be Aloy fulfilling her work as John the Baptist and finding in the ruins the message of Christianity.

We, thankfully, know what that next step is to bridge that gap, and elements of this game frame Catholic ethics.  Instead of being mindless action, this RPG does produce discussion of ethics regarding end of life, inherent human dignity, and the proper use of knowledge and technology.  It might surprise non-Catholic gamers how well this game reads against St. Pope John Paul II’s Evangelium Vitae (“Gospel of Life”), give the encyclical’s focus on birth control, abortion, and euthanasia.  JPII, however, masterfully ties these present concerns with the larger context of the proper dignity of humanity, just as HZD reinforces that life is worth living.

Who expected that from ‘robot dinosaurs’?

Game of Thrones and the Pursuit of Perfection

As a thirty-something, I am in the largest market in gaming right now.  I grew up in the SNES Golden Age of RPGs with games like Final Fantasy III/VI, Earthbound, Chrono Trigger, Secret of Mana, […]

18th Sunday in Ordinary Time: We Are What We Eat

Click Here For This Week’s Readings. One of the more consistent rules of visiting a mystical, supernatural realm is, be careful what you eat. In Greek mythology, Persephone ate some food from the Underworld […]