What comes to mind when you think about spending time with Jesus? Let me be a little more clear. I am not talking about getting on your knees to pray before going to sleep. Spending time studying and reflecting on Scripture isn’t what I am referring to. If you were going to leave your home and meet Jesus for a cup of coffee at the local Starbucks, how would it go?

Before we go any further, I realize time spent in prayer, meditation, and reading the Bible is all time spent with Jesus. My intentions were not to downplay these necessary forms of one on one time with God.  In order to start getting at the point I wish to make in this article, let me share a little of a recent trip to Chicago.

The purpose of the trip was to visit Wrigley Field and watch the North Siders take the field against the Colorado Rockies, a game that ended in a loss for the defending World Series champs. The actual score is irrelevant. It’s the experience that matters.

A day at Wrigley

That Friday morning, I woke up more excited at the hotel than I had been in a while. It was a day game, so there wasn’t much time for messing around. It saddens me to admit that while I said a quick prayer, something about my wife and daughter being safe at home and the Cubs destroying the forces of evil, I didn’t spend any time in my Bible that morning. Now that I think about it, my Bible wasn’t even pulled out of my luggage the two days I was in Chicago. 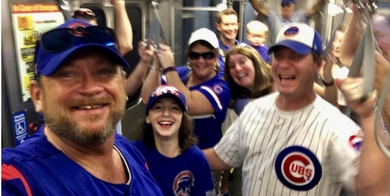 Anyways, back to the big day. After taking a quick walk around the hotel soaking up all the hassle downtown Chicago has to offer, my friend and I made our way to the train station. It was about a ten-minute walk with baseball talk the entire time. As soon as we were on the train headed north, it wasn’t hard to spot everyone else on the train making their way to the game. There was all the high fiving and cheering one could wish for.

As we exited the train on Addison, we were able to see the start of what would be about 39,800 Cubs fans making their way to the park. There were also about 300 people in gray and purple jerseys lost in the mix. They obviously had some issues. During the two hours at the field before the game, the nine innings, and the train ride back to the Magnificent Mile, everyone’s attention was on the same thing. There wasn’t a care in the world. The game was all that mattered. Two teams of grown men. Men who are paid a ridiculous amount of money to stand there and swing a piece of wood at a small ball. Something children do for fun.

Don’t worry, this isn’t the sports page. I brought up that horrible loss to start painting a picture for the rest of the article, coffee with Jesus. While each of us is well aware of the fact, I think we have grown way too comfortable with allowing ourselves to forget just exactly what happens every time we are at mass. Somehow, we allow ourselves to lose sight of the fact that we are actually in the presence of the Messiah.

I am a lucky man. With the education I have in theology, all of the lectures and books, conversations with mentors and other theologians, I have been blessed with a wife that teaches me more about my faith during simple conversation than any seminary class I have ever been a part of. With her it’s different. It’s easy to hear the emotion in her voice. I can see the excitement in her eyes every time she talks about Jesus. I can also notice the concern when there is something bothering her. The other night, after returning from her prayer group, she was concerned.

She proceeded to tell me how a couple of the other women she attends mass with and then meets afterward are missing everything. While on their way to spend time in the presence of Jesus, they are arguing with spouses. Voices are raised at children. Even during mass, there seems to be no consideration of exactly what is being experienced. And once the time with Jesus is over, they rush to their cars, threatening children and loved ones what’s going to happen if anyone realizes they aren’t a perfect family.

I can’t remember what I did that night after my wife had gone to bed. I think I wrote an article about five tips for an effective SEO strategy or something. However, when I laid down to go to sleep myself, my mind raced back to the day of the game. Not because of how broken hearted I was over the loss. Because I had gotten so worked up over something as irrelevant as baseball. I will never say that again, but it’s true.

As Christians, why don’t we act the same way when preparing to spend time with the Creator of the world and everything in it, and don’t tell me this article doesn’t apply to each and every one of us at one time or another because it does. I get it. Baseball might not be your cup of tea but there is something in your life that gets you more excited and consumes more of your attention than mass from time to time.

Receiving all that He offers

I attended the noon mass the following day and I thought I would give it a try. After putting on my favorite Cubs shirt and getting ready, I went into my office and dimmed the lights. I just sat there. As quiet and still as I could. I begged God to open my heart to what He had in store for me over the next 40 minutes. I made the trip to the cathedral downtown with the radio off, searching the road and its surroundings. There was a need to recognize the Holy Spirit at work in the world around me. 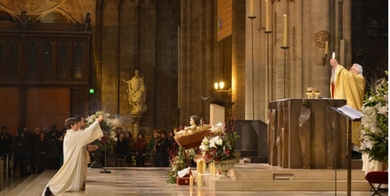 I arrived early and spent more time on my knees than usual, begging God to allow me to experience Him in ways I have missed during mass before. As the service ended, I returned to my knees making sure God knew I wasn’t leaving until He was aware of how much I wanted Him in my life. I wasn’t there for a 40-minute experience. Transformation is what I was looking for. I was there to soak in as much of His presence as I could.

Once I returned home, I rushed to my office to go over the readings for the day again. I needed to spend more time sitting as quietly as I could. I can tell you about the experience, but it wouldn’t matter. My relationship with Jesus is mine. You’re supposed to have your own.

Before you rush off to the comment section to tell me I’m making a big deal out of nothing, why don’t you try it once. Better yet, try it several times. Attend mass in a similar way and tell God it’s going to be your routine until He shows you more than He ever has before. If you receive the same results as I did, you won’t ever rush off to mass again. You won’t be able to. I think more of us need to feel some of the concern my wife experienced that night.

Jesus isn’t someone you hurry to go drink coffee with. He is the sovereign God of the universe. I think we forget that too easily at times, especially when it matters the most. If you’re only there to receive the Eucharist and go on about your day, you’re missing the whole point.